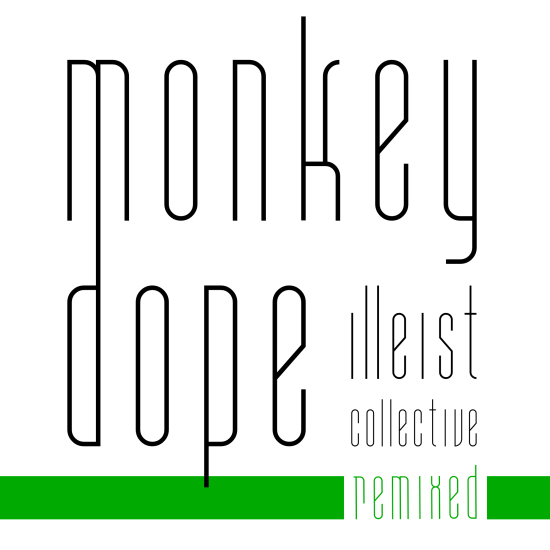 This album is made out of remixes and covers from illeist collective's latest full length album Monkey Dope - and it's available as a free download!

Domi Chansorn (CH) might just be the next big thing from Switzerland. The multi-instrumentalist is truly an exceptional talent, distinguised drummer and highly gifted composer. 2012 he won the „m4music Demotape Clinic award“ and ever since he has been playing all over Europe. And he wants to continue to shape and influence the Swiss and international music landscapes. "Music is my nutrition. My biggest career wish is to continue to be creative, to explore and influence many different fields so that my music."

After several years of lurking, Ultrasyd (FR) has been active in Chiptune scene and Demoscene (as a member of Brainstorm) since 2009. He produces music in various styles, ranging from classic demoscene Chiptunes to Electro and Metal. For 8bit music, he uses Amstrad CPC, Amiga, Game Boy, Master System, MT32, Commodore 64 ... with a slight preference for the sweet sound of the Atari ST. He made his first steps on stage at Blip Festival New York in 2011. Ever since he has not stopped to surprise us with the music he comes up relaing on old school game devices.

Taking original inspiration from the early eras of techno and electro, Curtin (USA) has experimented with a vast number of styles, producing innovative stateside sounds of every variety. Curtin’s impressive discography dates back to 1992 and ever since he’s been unwilling to restrict himself to a singular style. Over 70 singles, 9 albums and 20 years later, Dan Curtin is as innovative and vital as he has ever been; making him undoubtedly one of the key players in the development of electronic music as we know it today.

It was his father's Atari which led him to experiment with electronic sound production at an early age. Silas Bieri (SWE) is not only known as the producer and singer of the "illeist collective" but also as a sound designer for performing arts, film and radio plays. Soldering his own instruments, programming his own plugins, Silas' music is filled with unique sounds that are the result of endless playful modifications and made tangible by the magic of the record button.

Reincarnation. Recycle. Transformation. Those were the guidelines at the beginning of the project Multisonic (CH). Create new out of old. Not old as in "used" or "senescent", but as already existing material. Melted together with original sounds, new tracks are born. Having played as keyboarder in bands like Reding Street, Kapoolas, Y.O.Y, a lot of experience was accumulated. Inspired by the enormous variety of sounds and the endless possibilities of synthetic tones, Luka Corman works endlessly on his tracks until a unique song is created.

Under the guise of a Sunday skier hides the talented filmmaker and producer Cee-Roo (CH); a music lover who likes to update classic songs in a clever and original way, while keeping their a retro touch. He has created a unique universe, combining professionalism, creativity, fantasy and humor. He produces his own videoclips, with which he has achieved viral fame with over 2’000’000 views on his youtube channel. Cee-Roo will not stop surprising you. Get ready!

Sofia Härdig (SWE) has been called Sweden's best-kept secret. She has been hailed as both an "electronica queen", the Swedish rock scenes new hope and "the next girl in experimental music". Her working method is break apart and reassemble the fragments into a larger whole, something that is both more beautiful and dangerous. Sofia herself says about her music: For me it's beautiful with that which is not perfect, in the dilapidated, broken and in the mistakes I see beauty You get stuck, You listen and forget time and place..

Sleepwalk (CH) can shine through even modest and subtile shades, and a good dose of playfulness and humor. Their sound is immensly diverse and they prove with their individual take on modern music that it is possible to combine Clubsound with sophisticated songwriting: Potential club hits are combined with anthemic tracks for the perfect musical background of the apocalyptic visions. Besides the studio work another focus of Sleepwalk is a strong live presence from Europe to America.

Marcio Kantana (GER) has successfully been working as producer and Live-Act since the nineties. In 2008 he founded the label Aspekt Records. Since then, Aspekt Records developed into a successful label, releasing every month new material on vinyl. With remixes from Haito, Bjoern Nafe, Mike Wall, Fengari and other top artists, with whoom Marcio Kantana has been working with for ages.

MASI (CH) is a steadily changing experiment driven by a man who is constantly working on his own sound. MASI is as dedicated a musican as one can ever be; never to settle for anything less than where his vision leads him. He thus composes, records and produced his music himself as he wants to have full creative control of his work. MASI has played shows in Montreux, France and Belgium and thus impresively demonstrated on numerous occasions that he’s is definitely one of Switzerland finest musical exports.

Producer, DJ, pianist and drummer: +2+ considers himself the archetype of the imperceptible musician. For about 20 years he has played his crazy machines and the piano in bars and clubs. Three years ago, he composed the original music of the documentary-fiction "Black Sea Coast" by Radu Zero. And nowadays it's dance music that really gets his music heart pumping. Electro, house, progressive or even eurodance or dub. Theres ain't no style he can get enough of.

When we recorded Monkey Dope in a little wooden house in the swiss mountains in spring 2011 we didn't expect that the sounds that we were about to record were the beginning of a long-term creative process. We feel honoured and grateful to see how over the last two years our songs have inspired all kinds of artists to create short movies / video clips and - of course - remixes.

We wanna thank you all for investing your time, energy and creativity!
Silas, René and Miro

Yes, you can donate. Also in some remixer's favor! Just send us the artist name by e-mail or Facebook and we'll forward the donation for you) or use PayPal. Thanks for keeping us and the other artists running!

The album is available on Spotify, iTunes, Amazon and a bunch of other online stores. At this time the album doesn't exist as a physical disc. Yeah, we know: Never say no...